Connexion (June 2012) is the CNEF magazine (written in French). Its third issue is the opportunity to get a confirmation that social work, social Gospel and solidarity are back on the map for French Evangelicals, after a few post World War II decades during which these themes became old-fashioned.

Under the umbrella of the CNEF organization, evangelism appears to be defined in a holistic way, starting from the individual to reach social level.  One of the reasons of this emphasis may rely on the CNEF distinctives.

According to its charter, the CNEF is the Conseil National des Evangéliques de France (national Council for French Evangelicals). It "provides a platform for exchange, reflection and dialogue with a view to strengthening bonds and increasing the visibility of French protestant evangelicalism, whilst respecting its diversity."

This platform started to take shape in 2001 with conversations between charismatics, pentecostals and other Evangelicals. Many conflicts and misunderstandings had to be solved before really working together.

Last but not least, a General Meeting was held on the 15th June 2010 to officially and publicly found the CNEF, with Baptist pastor Étienne Lhermenault as its first president.

Since 2010, the CNEF has gained recognition in the media (in daily papers like Le Monde, Le Figaro, Libération etc.) as the first large French Evangelical union with a strong credibility. The first CNEF National Convention organized in Montreuil (near Paris) on the 26th and 27th of January, 2012, confirmed this new status.

For the first time in French history, the 2012 ceremony of Presidential vows adressed to the main religious bodies included Etienne Lhermenault, as the CNEF president. Before 2012, the French Protestant Federation (FPF) used to be the only Protestant body to be invited to such high profile events. Not anymore. 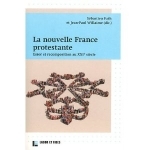 As described in the major book La nouvelle France protestante (2011), French Evangelicals amount today to about 700,000 believers, including 600.000 practicing christians and 100.000 non-practicing -for various reasons including age-. Largely due to the newborn CNEF, this fast-growing Christian minority is now more visible than ever in secular France's public sphere.

Creating bridges instead of walls

For the current French government, CNEF representatives are now considered as useful partners, as long as local religious issues have to be dealt. This new landscape has been made possible by a creative sense of Evangelical Ecumenism. Although based on an uncompromising willingness to share the Gospel, the French CNEF traded asperity for access, trying to display a "builder" image instead of a negative attitude.

This might contribute to explain why social action is highlighted in a very positive way in this third issue of Connexion (CNEF magazine): maybe more than ever before, the growing French Evangelical force claims its willingness to heal, repair, share and create links and bridges instead of walls. Let's remember, however, that all of this is quite recent. And fragile. The CNEF is already challenged from within (some fear an institutional drift, compromising the healthy grass-root culture of French Evangelicals) and from the outside (by those who criticize too many compromises, or a useless structure). Only time will tell if words and intentions fit with ambitious and lasting actions. (to see the CNEF website -in French-, click here)