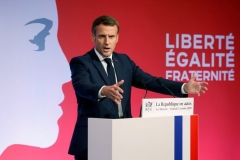 Will the current French government remember its first word, "Freedom"?

As it is heading toward a new law targeting "separatism", concerns rise.

The main idea of the law is to tackle more efficiently radical political islam's attempts to destabilize the country. Many terrorist attacks over the past years, including the beheading of a French teacher, Samuel Paty (6th of october, 2020), have increased political concern. As the strong leader he is, French President Emmanuel Macron has rightly decided to upgrade legal devices available to tackle more effectively the "separatist" threat.

However, should religions pay the main price of restricted freedoms and more controls? Is the ever increasing harsh State control on people and associations the only way to promote fraternity -and better security-?

Sure measures have to be undertaken, including a review of French close relationship with Wahhabi dictatorships (Qatar and Saudi Arabia). But damaging freedoms in the name of security is a dangerous path to be followed, especially since social mixity and a quality education seem to be a bit neglected.

The increased and heavy control on religious associations "(1905 law) actually undermines one founding principle of French "laïcité" (secular system), which is separation between religions and the State.  Up to now, since the installation of the Third Republic (1875), only the Vichy Regime, during World War II, turned his back to this principle of separation. This autoritarian regime resettled elements of control and a kind of "concordat" regulation, source of inequalities and religious discriminations.

Time will tell if French president Emmanuel Macron, knowned for rather liberal views, will surrender to secularist hard-liners (who dream of heavy control on religions while being far less controlled themselves), putting French tradition of freedom and "laïcité" at risk, or if he will manage to boost the government to correct and improve the bill before it's too late.

For further readings, a good article has been published in French by Marie Lefebvre-Billiez in a Swiss protestant media. Link