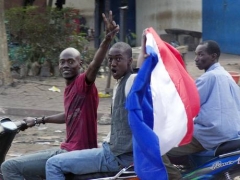 Many different streams have built up the French left-wing tradition, including a growing trend in favour of multiculturalism, and a lasting pro-palestinian stance.

No wonder if according to polls, about 9 out of 10 French muslims voted for François Hollande (former leader of the Socialist Party) at the last presidential elections (2012).

However, it would be a mistake to conclude that the current French authorities play "soft on radical islam" and jihadists.

The current war in Mali, mostly led by the French (used to intervene in this part of Africa), is an illustration of the French doctrine towards islam: OK for full rights and zero tolerance for discriminations. But NO to any kind of religious violence (rhetorical, political, or through terrorism) and a bold YES to containment (through strong anti-terror laws or military action) when the threat of radical islam kills people and attacks French interests.

Which means: in case of an emergency, France will react strong and fast. As Mali was ripe as a whole country for Sharia law 4 months ago, due to the growing pressure of violent radical muslim militias, France decided to intervene.

France did it boldy without much help from Europe, and without much support either from America. More than 4,000 French soldiers have been sent on the ground, well equiped and well trained, through the "Operation Serval", with the growing support of neighbouring African countries.

This strong and fast military involvment led in a few weeks to the retreat and defeat of radical muslim militias, the destruction of Al Qaeda strongholds. French "Operation Serval" freed millions from inforcement of Sharia law. From the perspective of democratic values, it is already a clear success, even if we all know that the threat will never vanish completly. Eliminating al-Qaeda-linked extremism in the region can't be achieved anytime soon.

For a long time, many observers from the other side of the Atlantic used to criticize "female" Europe, too soft, too sweet, to weak in front of terrorism. France's intervention in Mali invites us, to the least, to reconsider the "cliché" of strong America and weak Europe.

There is of course a large part of truth in this idea. Yes, America's huge "ninja" army is by no means comparable to what Europe can put on the table in terms of Defence. Yes, America is much stronger in military terms. But politically? As a matter of fact, while Barack Obama's America did not respond much to the dreadful slaughter of its own ambassador in Libya, retreated from Afghanistan without really completing the task, and still supports Mohamed Morsi's Egypt in spite of its religious radicalism, current fighting France suddenly appears even bolder than Obama's America.

It does not mean that France is anti-islam... Most muslims in Mali do support the French in their war against Al Qaeda: An Al Jazeera poll found that 96% of Malians supported French intervention! The French do not wage war against islam. But it seems the French Republic is currently more strongly determined than some other democracies towards intimidating rhetoric, violent religious zealots and terrorist strategies designed to frighten citizens.

Will this remain a lasting feature of France's international impact, especially in Africa? Not so sure, as heavy cuts in military spending may be annouced in the coming months or years... What France has currently accomplished in Mali may not be possible again in 5 or 10 years time. However, for the moment, as the Mali war comes to a close end, if West Africa has become more secure for all its citizen (muslims and not muslims), let's say thanks to the French.

To read more about the current events in Mali and the military impact of the French, please have a look at this BBC article, "France confirms killing of Al Qaeda leader Abou Zeid in Mali"