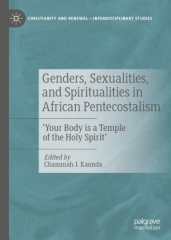 In the last three decades, African Pentecostalism has emerged as one the most visible and profound aspects of religious change on the continent, and is a social force that straddles cultural, economic, and political spheres. Its conventional and selective literal interpretations of the Bible with respect to gender and sexualities are increasingly perceived as exhibiting a strong influence on many aspects of social and public institutions and their moral orientations.

As usual in English-speaking synthesis, French-speaking Africa is rarely mentioned, except a chapter devoted to Congo.