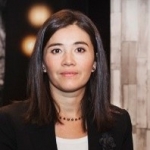 She is also considered as a prominent defender of religious freedom in that country.

Published last year in the International Journal for Religious Freedom, this insightful article discusses the historical roots and conceptions of laicity underlying the 2021 reform.