Remember Annalisa Butticci’s name : as the Padova International Conference on Pentecostalism reaches its end today, she’s the one to be praised (along with her mentor Enzo Pace) for boosting studies on Pentecostal and immigrant churches in Latin Europe.

After having completed her Ph.D in Sociology and Methodology for Social Science Research from the Catholic University of Milan (Italy), she conducted an ambitious field work, both in Nigerian immigrant churches and in Nigeria (she spent 8 months in Lagos), and she just achieved an amazing task in organizing such a large and successful conference in Padova. (Click to continue)

I confess I did not previously know her, and (shame on me), I barely returned her emails before the conference (a bad habit I have to be overwhelmed by unanswered emails).

Let’s say that she is definitely a scholar to be known, not just because she’s very smart and well specialized, but also because she’s a skilled organizer, mixing professional efficiency with smiling diplomacy and a masterful sense of timing. Speaking a perfect english, she's about to become a leading figure of the European research field on Pentecostals and immigrant churches.

This is all the more good news that the field is enormous. Thousands of new churches flourish on the European field, mostly boosted by African immigration. These churches are young, lively, poor and growing. It is more than time to study them from a comparative point of view. In that respect, one of the things that struck me today is the sharp contrast between France and Italy.

Both of these Latin countries are quite secular now, within a Catholic cultural framework. However, the way Pentecostal Immigrant churches deal with other actors differs dramatically. While in France, several bridges have been built between African churches and current Protestant networks (specific curriculum in theology or Bible schools, Mosaïque network, etc.), nothing similar is observed in Italy.

According to what I heard today morning, Italian Pentecostals do not seem to have develop any regular relationship whatsoever with new Nigerian Pentecostal churches in Italy. Another revealing conclusion is that African churches in Italy seem apparently less multicultural than their French counterparts. While lots of immigrant churches in France mix people from different backgrounds, the Italian landscape seems more "segregated" (so to speak), in spite of many people of goodwill, including some Catholics. 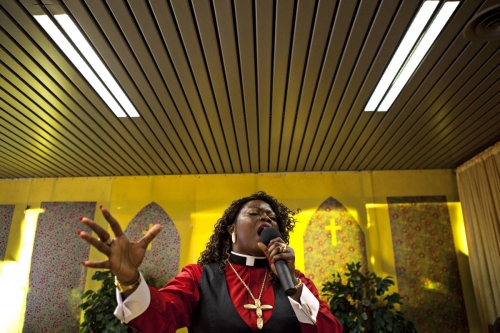 Nigerian female pastor in Italy (from the Na God ! Exhibit)

Why such a contrast between France and Italy ? Several reasons could be highlighted.

1/ African Churches in France are a bit older than in Italy, giving more time to built bridges;

2/ African Churches in France are mostly speaking French, which helps so much to cmmunicate with other French Protestants;

3/ There is a very strong and lively French caribbean population in France. This 100% French population shares with African immigrants the same dark-skinned phenotype and some cultural bonds; this helps to create a bridge within churches between "native" French and African newcomers, while such a situation does not exist in Italy;

Several other reasons could probably be mentioned too, emphasizing the need to further comparative studies at the European scale.